Line Beginnings - Where we started

We have always had some interest in railways, visiting restored lines when out and about around the country and collecting a selection of toy trains with our  sons when they were small. Our small garden was first transformed, in 1993, by a wooden track base around two sides. Eventually this was improved with the addition of a dwarf wall along two sides, wide enough to take two 0 gauge tracks side by side. Over the next few years the track grew to circle the fish pond at one end and the vegetable patch at the other.  A collection of rolling stock was purchased including a Meths powered steam engine and various electric engines.

0 gauge proved difficult to run in the garden due to dirt and muck in the air. That, combined with the demands of young children, caused the railway to fall into disrepair and eventually it got removed. 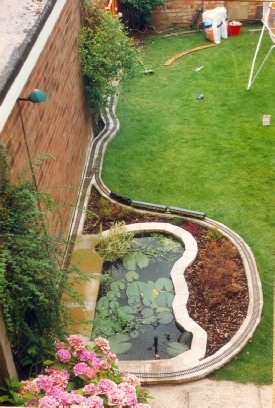 Many years later, having spotted an LGB starter set in a model shop window, the railway returned.

To begin with, a short length of track was laid on the floor in the lounge running from sideboard to TV and back. Around this time, one of us decided, for a joke, that some of our collection of small 8” Russ Bears would fit nicely in the trucks as passengers, despite not really being to scale! Thus began the Teddy Bear Line.

The Bears wanted a longer line so it finally made its way outside. 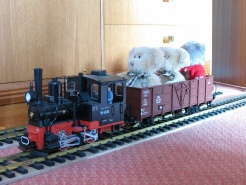